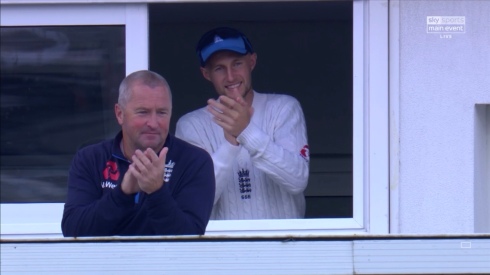 302/7 and not one fifty in sight. I believe the highest score without a fifty being scored is 315. It is possible that England will be able to break this record. I hope not. I really would like to see Butler get a fifty. Getting England to a really good position is more important than getting a record. I mentioned in my analysis yesterday that England would need to get at least 350. The general consensus is the current lead of 128 is worth about 200. Bob Willis says that a lead of another 40 runs will give England a very high probability of winning.

CricViz puts the chances of England winning at 97%. If the weather is any indicator then England have a very good chance of winning. The mantra that the pundits have been saying is you have to look at the skies and not the pitch when deciding whether to bat or field. Jimmy Anderson and Stuart Board must be licking their lips looking at the sky. We could probably see one of the few test matches where the sole spinner in the English team does not get to bowl any overs. Dominic Bess has batted well once again. The way I see it is any runs scored by people coming in after Jos Butler are extra runs. What role would Bess play in the future once Leach is fit? I am almost in disbelief as I write this but could it hurt anymore if Bess is treated as a batsman and played at seven? This would mean that Malan would get dropped. This is the conundrum. Except for the test match at Perth; Malan has not really done well. I am not going to pull a Michael Vaughan and call for his head to be placed on the chopping block. I like the way he bats. Moreover the two more important issues for England is Cook’s opening batsman partner and a good spinner. The problem at number four can wait.

Below are the performances of England and Pakistan in this test so far and the first one.

Tomorrow will be extremely important. It will determine which side comes out on top. At this stage, though it is England’s test match to lose.

This table will change by tomorrow. I am not sure how though. That is part of the fun of analysis. The trend and Numbers can only take you so far. What happens finally on the day is a different story.

One thought on “England vs. Pakistan: 2nd Test Day 2”