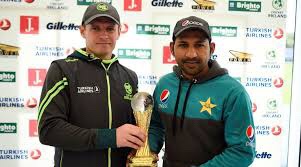 This has come late but I had to make sure that I got my basic methodology and the basis of my analysis out there first. Analysis without reason is meaningless. If I have to come out with a ranking system then I should explain why the results came about. These are what my numbers reveal.

As mentioned in my methodology; I start each team with 1000 points. Ireland ended with 841 points and Pakistan with 1,192. I believe that this is a really good result considering that Ireland has just started out and the Pakistan side on paper is significantly better. Mohammad Abbas was the stand out bowler of the match. He performed better than all of the other Pakistani bowlers put together. He also scored more than the entire points scored by the Irish bowlers. Below are the the scores of the bowlers. As a benchmark 50 points is the average I would expect from a bowler. From an all rounder I would expect 30 points.

The stand out feature for me is that only two bowlers have beat my minimum expectation. Two all rounders barely made the mark. Either my expectations for the bowlers were too high or they just did not bowl well.

Below are the top batsmen. Four of the seven are all rounders.

These numbers are actually better than what I was expecting. I would consider a specialist batsman to get in excess of 100 points. I would expect All rounders to get about 75. Once again this is the first test match. I will have to check if my assumptions are correct or not.

These are the best Eleven performers of the game and the Test XI from the game.

This is the interesting bit for me. In the Top eleven you have seven Pakistanis and four Irish. However my Test XI gives the exact opposite. This situation has more to do with a lack of choice for certain positions and too much choice for the others.

The Captains: My system does not judge who the better was based on their performance. It only determines who played better. William Poterfield played better than Sarfraz so Poterfield got the nod.

The Wicket Keeper: This was a process of elimination. Sarfraz underperformed his counterpart. To top that Niall got more points for his wicket keeping than Sarfraz.

The Openers: Imam-Ul-Haq was a no brainer. His opening partner was the question. As stated above William Poterfield was chosen because he was Captain so that slot filled up.

Top Order: I put Asad Shafiq at three which is above his normal batting position. He seemed good enough to bat at that position. Again as stated above I chose Niall as my Wicket Keeper and I placed him where he usually bats at four.

Middle Order: Kevin O’Brien had to be there. I promoted him from six to five. I then put in Shadab Khan and Stuart Thompson. Barbar Azam was marginally better than Stuart Thompson however Thompson gave that extra bowling option. If Barbar Azam is chosen then he will bat at five and the others come in after him. This would essentially mean that Kevin O’Brien will have to put in a bit more work with the ball. Shadab Khan will have to be spot on and so will the bowlers.

Bowlers: The four fast bowlers picked themselves. They were the only people to score points and there was no competition as the others were worse.

Twelfth Man: Faheem Ashraf. It is possible that Faheem Ashraf had an off day with the ball. Considering this I am willing to consider replacing Stuart Thompson with Faheem Ashraf.

2 thoughts on “Analysis: Ireland vs. Pakistan”