The setting sun set on Malahide Cricket Club seemed to epitomise the penultimate day’s play. Kevin O’Brien stood tired but strong and helped the Irish side turn a deficit to a 139 run lead. In my review of the First Day’s play, I mentioned that they should have bowled first which thankfully they did. I did not foresee the collapse of their batting though I was not surprised by the resistance of the Pakistanis. Yesterday I mentioned that the Irish had to bat through the day if they had to have any hope of drawing the match. Ed Joyce must be kicking himself for getting run out. After the quick fall of wickets, cricviz predicted that Pakistan had a 98% chance of winning. The heroics of Kevin O’Brien and Stuart Thompson along with Tyrone Kane who is still at the crease has decreased the chances of Pakistan winning to 87%. 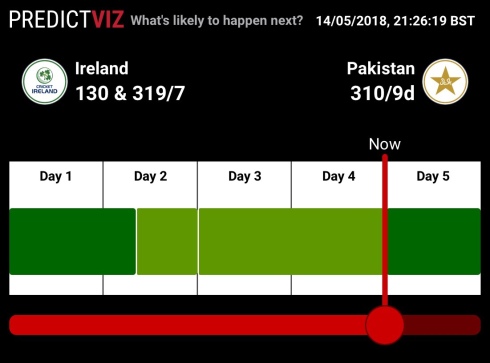 I have never been a good cricket player but I can analyse the game. I trust the way I read the situation. I have little faith in algorithms and quantitative predictive formulae. This is how I read the situation. There are 90 overs that can be bowled tomorrow. Rameez Raja made a comment that Sarfraz Ahmed is a better one day captain than test captain. Pakistan is a really good white ball team. If Ireland is bowled out tomorrow then they will play the game as a One Day or T20 game. If Ireland gets out before lunch then they will lose the test match. In an interview after the day’s play, Kevin O’Brien said that adding another 50 runs will give them a fighting chance to win. The Irish have been scoring at 2.61 runs per over. Scoring at that rate until lunch will take them past 200. They may have a chance then because you will have between 50-60 overs left. There is also a chance of rain starting in the afternoon. This would increase the chance of a draw and give the Irish hope of making some early inroads. Irrespective of how the weather plays out; Ireland will most probably lose if they cannot make it past lunch. Pakistan has a decent chance to win if they have 50 overs remaining. 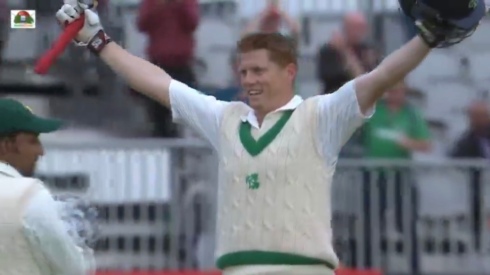 Kevin O’Brien. He will go down in the annals of Irish history. He scored 30% of the runs of the first innings and so far he has scored 37% of the runs in the second innings. I really admired the way he batted on with grit and determination after batting for nearly five and a half hours. Sadly his work is not yet done. He has to bat on as much as possible tomorrow too. He holds the key to how history will record this historic event. I believe that the responsibility and rewards are rightfully placed with him. I hope he continues to play well and the tail wags as much as possible.

One thought on “A Glorious Irish Day”