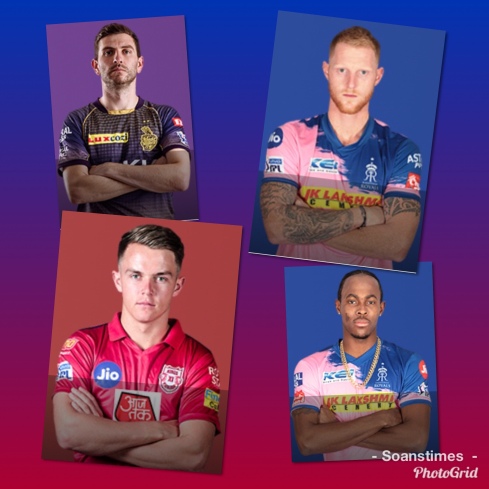 The World Cup squad was announced along with the teams of Ireland and Pakistan. The difference between the two teams is Chris Jordan and Jofra Archer. I cannot decide whether this move is a cop-out or a brilliant move by the ECB. Ed Smith took a bold step when he decided to bring in Adil Rashid and Jos Buttler into the team based on their white ball performance. There were absolutely no surprises in the team that was selected. I will dwell into the team in detail after the Royal One Day Cup over the weekend. For this post, I will be concentrating on four seamers that are playing in the IPL.

Harry Gurney’s proclamation that he signed a white ball contract did not go well among cricket fans. This was in complete contrast with Luke Wright. I really liked the statement he released. I am thrilled that Adil Rashid has signed a full contract with Yorkshire. Truth be told I did not expect him to be at Yorkshire. I did consider that there was a good chance of him moving to Durham. I hope that the controversy surrounding him last year is over. Adil Rashid is an excellent one day bowler. He has not been as successful in Tests. I hope he improves although I do believe that Jack Leach will give him a good run for his money. Sometimes people just need a break to get back on track. I do hope that Adil Rashid will be ready for The Ashes. England will have to be at their peak to win the series.

The English seamers taking part in the IPL are a good mix. Ben Stokes plays every format of the game at the international level. Sam Curran has changed Test matches by himself. Jofra Archer has recently qualified for England. The selectors want to “prove” himself at the international level before they decide whether to give him a slot for the World Cup. He has in the meantime played all domestic formats for England as well as playing T20 for various leagues the world over. Finally, we have Harry Gurney. Gurney has played three games for KKR. It is more than I expected him to play. His debut game for KKR was good. The problem with the IPL is that one game is all you need to decode a bowler. The bowlers that succeed are those that can adapt. CSK is a tough team to beat but 24 runs off the last 12 is defendable. Gurney’s 16 run over all but killed KKR’s chances.

I can understand the need for professional cricket players to retire from red ball cricket. More so after having a nice discussion with Brian Brain. There is a limited amount of time you can play before your body gives in. Playing white ball cricket gives you more money per time spent on the field. There is nothing wrong with that. The issue though is money being the sole motivator. Your white ball performance will be put under a microscope as soon as a white ball contract is announced. Gurney has not done well. Luke Wright was not chosen for Leicestershire. Tymal Mills is injured and has not played since the Pakistan Super League.

I consider Test Cricket to be the pinnacle. If everyone decides to freelance then there will come a point when we will not have the quality to play Red Ball Cricket. It will be a sad day when that happens for that is when we will truly have to find an urn to place the ashes of cricket itself.