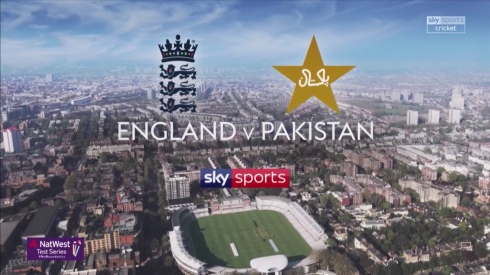 I was hopeful of some rain through the day tonight after the heavy rains and thunderstorm last night. Sadly it was not the case. I was terribly disappointed to see clear skies and a good ground as soon as SKY started telecasting at 10:00 am. I was even more disappointed that I did not get to see any of The Cricket. Church though is more important for me than watching cricket. Besides, I would have been disappointed if I had stayed at home to see England lose. That may actually prove to be a beneficial as I can be more analytical about the end.

Ireland lasted 40 minutes before they were bowled out. England did not even last half an hour. I mentioned in my analysis yesterday that England had to bat at least until lunch if the rains came otherwise till the end of the day. They needed to get to 200. They did not even come close. 64 runs was never going to be defendable. The final day changed my graph on its head. I can understand Pakistan coming back so strongly. I cannot understand why Bess was brought into bowl. The only logical reason is that Root made him bowl so that a point could be made that his choice of batting first was right. The match was lost at the toss. Pakistan got what they wanted and supposedly so did England. A comparison between Ireland and England is inevitable. Under my system Pakistan scored 1265 points against England and 1347 against Ireland. England scored 861 and Ireland scored 954. Simplistically put Pakistan played better than Ireland but Ireland played Pakistan better than England.

There is no point in pulling up the win probability of CricViz because we know the result but below is the result of the batting, bowling and fielding of CricViz and my results. 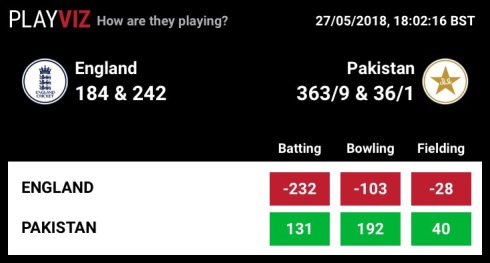 The effect of Balance and Bess are clearly seen on Day 3 but that was the closest they came to being close to Pakistan.

Below are the top batsmen, bowlers and total scores of the players. 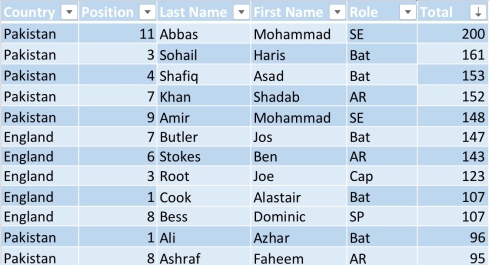 My numbers indicate that Pakistan clearly lead in the bowling department. In batting, they are more equal than not. Bowling is where England is weak in and not their batting. Stokes played a major role and Anderson came to the picture later. Wood did not perform as well. He had catches put down but he just did not bowl well. Dominic Bess is a topic I really do not want to talk about. He was lucky to get his 50. If he did not do that then everyone would have been calling for his head. I still believe that you need to get a better spinner in the side. Get Moeen Ali back in. He surely cannot bowl worse than what Bess did.

Based on this my test XI would be as follows 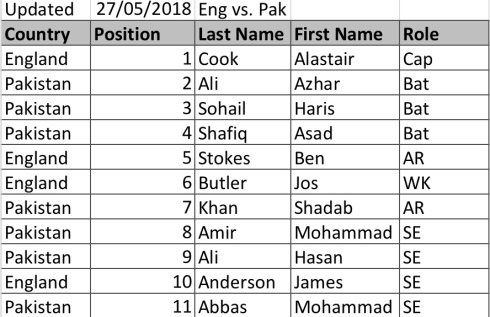 I have taken a few liberties in creating this Test XI. I have dropped both the captains because they were not good enough for their slots. Instead, I have made Alastair Cook as Captain as he has done it before and I have given the gloves to Jos Butler.

As always I would like to know what you think of this.

One thought on “Analysis England vs. Pakistan Test 1”